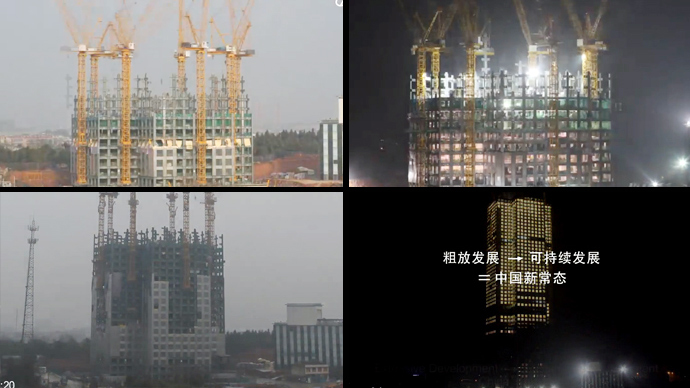 The building accommodates 800 apartments and office space for 4,000 people

Broad Sustainable Building beats its previous record: a hotel with 30 floors in 15 days

The Chinese construction company Broad Sustainable Building, specialized in prefabricated buildings, has managed to build a 57-floor skyscraper in just 19 days in the city of Changsha (Midwest), according to the firm on its official website.

In a video the firm, based in the same city, shows fast motion how the construction was developed, in which workers were building three new floors every day.

The building of 186,000 square meters and 800 apartments and office space for 4,000 people, is the highest the company has managed so far to build, which in previous years had already been on the news for being very fast in building skyscrapers.

In 2010 the company built a 15-floor hotel in 48 hours and the following year it created its greatest achievement so far, another hotel of 30 floors in 15 days.

According to one of the architects of the company, Zhang Xianmin, modular construction is not only fast, but also much more sustainable than conventional techniques because "it reduces the use of cement in an amount equivalent to 15,000 trucks."

"This almost eliminates the emission of dust in the air, something very important in China, greatly affected by pollution," says the architect, who also underlines the energy efficiency of a building that saves the equivalent of 12,000 tons of carbon dioxide compared to a skyscraper of equivalent size.

Broad Sustainable Building is the construction firm which decided to build, also in the city of Changsha, the future tallest skyscraper in the world (so-called Sky City, 220 floors). A giant building that the firm has promised to finish in 90 days, even though the project is now paralyzed due to problems getting official approval and doubts about the economic viability or safety of the skyscraper.